For many years, we have been passionately involved in the project “Wasserwege Nikolaifleet” (Nikolaifleet Waterways), a pathway on and along the Nikolaifleet, the oldest existing canal in Hamburg.

In particular, I, Marc Ewers, am trying to convince society and politicians alike of the idea of positively changing the historic city centre as far as Hamburg’s Speicherstadt, of improving appreciation and quality of life in the old town and ultimately of making this historic place more attractive, not just for tourists. It was through this idea of waterways that I also came across the initiative “Altstadt für Alle!” (Old Town for All!) with which I would like to actively promote the invigoration of the old town district.
What is the idea behind it? The waterways are intended to serve the sustainable revitalisation of the historic Altstadt centre between Rathausmarkt and St. Katharinen along the “Katharinenweg” urban space. This path begins on Hamburg’s oldest canal in the form of water footbridges, alternating with paths on land along the canal, at the Trostbrücke, runs underneath the six-lane Willy-Brandt-Strasse, over to the area in front of St. Katharinen with the possibility of walking up to the Katharinen churchyard and further along the course of the canal and showboat into the historic Speicherstadt and Hafencity. With a manageable financial outlay, a connection can be created here right through the middle of Hamburg’s old town, not least to cross the Willy-Brandt-Strasse/former Ost-West-Strasse which was damaged after the Second World War. In addition, a café, a pontoon placed in the Nikolaifleet or harbour moorings for events, could invite people to stay for a while and revitalise Hamburg’s historic city centre, bringing it back into focus. Furthermore, this path creates a new affinity with “Hamburg Altstadt”, being linked to a tide-dependent swaying of the jetty so as to feel nature itself in the inner city between low and high tide, as well as being connected to the historical sites of the oldest preserved harbour basin in Nikolaifleet. Using these paths could be made yet more attractive, especially through static and/or multimedia exhibits/showcases and events, e.g. in cooperation with the Hamburg Museum and the German Port Museum Hamburg, which is currently in the planning stage, and could become a crowd-puller, providing insights into life on the canals when they were in use.

The Hamburg-Mitte district assembly recently adopted this idea as an urban planning goal to be developed further – perhaps this is finally the decisive step on the way to pursuing this “labour of love” ourselves one day! 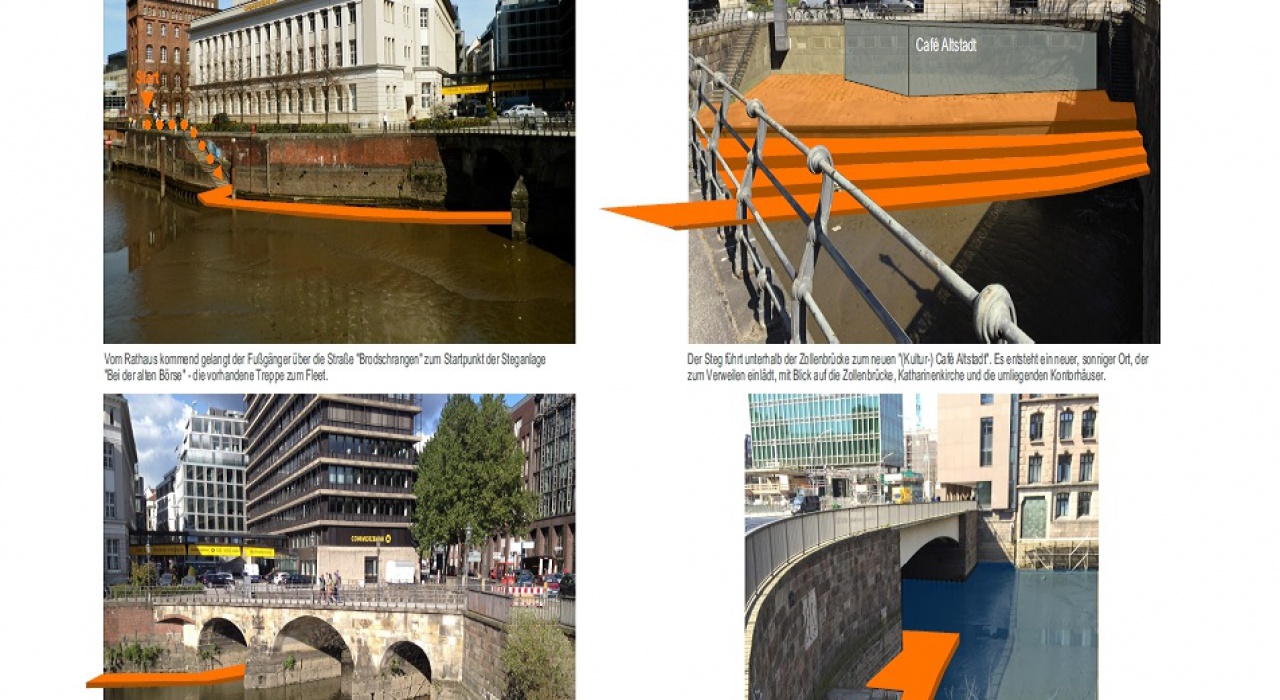