After a construction period of only 7 months from the excavation for the structural engineering work to the handover of the keys to the temporary new ward, the first of 17 possible patients were able to move into the new private rooms on Ward 9 “Qualified Withdrawal” of the Lutheran Hospital Alsterdorf. Offering professionally assisted withdrawal from alcohol and medication, i.e. physical withdrawal with the help of medication – guided by motivating therapy sessions to deal with the causes of addiction and to achieve long-term success – the Lutheran Hospital Alsterdorf is one of few clinics that specialises in this treatment.

The newly constructed building, which serves as one of three interim solutions as part of the overall “EKA New Psychiatric Building” construction project, was planned and realised with a floor area of approx. 420 m² using timber frame and a zinc roof. Thanks to this last interim measure, which has now been completed, the road is clear for the demolition of the existing building. The implementation of the overall project can now enter the final phase.

With the creation of the new building, which provides for the reintegration of Ward 9 into the main building after completion of the “EKA New Psychiatric Building” project, we and the client are pointing the way ahead. Actually in two respects: “Interim” does not have to be exclusively related to temporary planning or short-term use of temporarily erected ward modules, for example, but can or should also be characterised by sustainability and ecology. Once the ward has been reinstated, the building will be used as a school, which, thanks to the flexible space planning, can enjoy another special feature: “Wood as a building material from sustainable forestry” It generates creativity and well-being and is a living building material that we believe will have a positive effect on both the healing process of the patients in Ward 9 and on the learning atmosphere of the students later. This solution means that the subsidies used for the approved new hospital building will be put to good use in the long and not just short term. 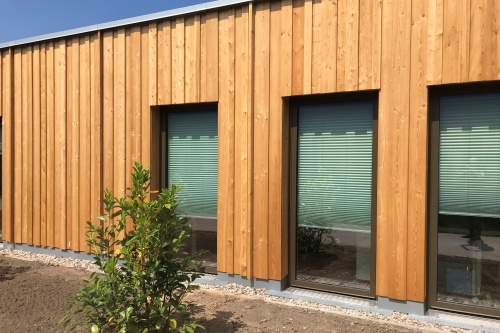